This article highlights how the new Mukilteo Ferry Terminal was designed to minimize environmental impacts with input from local tribes. Photos courtesy of LMN Architects. 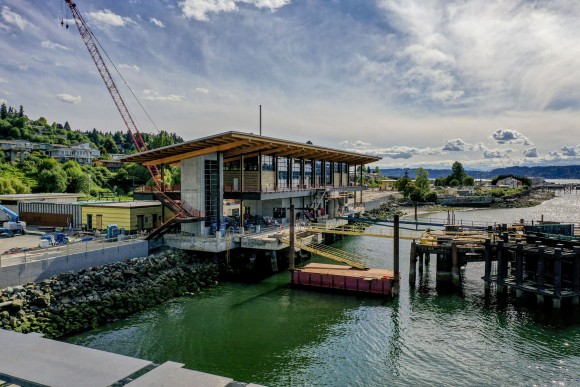 The Architects Newspaper
By Matt Hickman

When the Mukilteo ferry terminal—the eastern terminus of the Washington State Ferries (WSF) system’s Mukilteo-Clinton route—was completed in 1957, the small, picturesque city in southwestern Snohomish County that it serves was still a sleepy working-class burg perched on the edge of Possession Sound; a far cry from the affluent, fast-growing Seattle bedroom community of over 21,000 residents that it is today.

Wedged between an Ivar’s fish bar and a shoreline-hugging condo complex at the sloped foot of the Mukilteo Speedway, the 63-year-old terminal is too small, too congestion-plagued, and too seismically vulnerable to meet the demands of what’s now the busiest vehicle route within the largest ferry-based transit system in the United States, a system that includes 20 terminals and an annual ridership of 24 million, give or take. (The Seattle-Bainbridge crossing is technically busier than Mukilteo-Clinton due to its high number of passenger-only riders.)

The aging and overburdened Mukilteo ferry terminal currently accommodates over 4 million riders annually, all traveling along what’s arguably the most scenic stretch of State Route 525 (Washington’s ferry routes are part of the state highway system and present their own unique issues) between the mainland and the small community of Clinton, on the southeastern end of Whidbey Island. It’s expected to become even more overburdened as walk-on ridership during peak commuting hours is expected to increase by over 100 percent over the next 20 years.

In response, the Washington State Department of Transportation (WSDOT), which oversees the WSF, called for a somewhat rare move: The building of a brand new ferry terminal to accommodate the sharp influx of passenger traffic on the Mukilteo-Clinton route.

“We don’t build a lot of new terminals, and this is one of the first we’ve built in a long time,” David Sowers of WSDOT told Seattle CBS affiliate KIRO earlier this year.

Designed by Seattle-based LMN Architects with IMCO serving as general contractor and KPFF Consulting Engineers overseeing numerous structural elements of the project, the new Mukilteo Multimodal Ferry Terminal will be the bustling, promenade-flanked centerpiece of a larger redevelopment scheme that’s set to transform the Mukilteo waterfront. Well over a decade in the making, the highly anticipated new terminal, which meets modern ADA requirements, is seismically-safe, and vastly improves both passenger safety and circulation, is on track to be up and running on November 1.

Construction work on the $187.3 million project, which also includes a new toll plaza, holding lanes, fishing pier, vehicle transfer bridge, in-water loading and docking infrastructure, and an overhead pedestrian walkway in addition to the main passenger and maintenance building, first kicked off in the summer of 2017.

Located a third of a mile east of the current terminal, the new two-story terminal building—airy, highly accessible, and boasting a more spacious footprint than its predecessor that’s 30 feet wide and 100 feet long—has gotten a fair amount of attention due to its cedar-clad design, which is influenced by the form of the traditional longhouses built and used by the region’s Coast Salish tribes.

Tribal cultural motifs are also present throughout the building, from the elevator shafts to the main entrance, and include original works by local Native artists including James Madison and Joe Gobin. This, per LMN, bestows the facility’s public spaces with a “welcoming atmosphere of regional belonging.”

Coast Salish tribal leaders had significant input into the terminal building’s design through closely coordinated design sessions that Howard Fitzpatrick, principal at LMN, referred to as a “roadshow” process in which project leads from the firm—along with a tribal liaison from WSF—traveled across the greater Puget Sound region, models and renderings in tow, to meet with a total of seven local tribes and glean feedback and advice. “Everything we did was in super-close cooperation with local tribes,” Fitzpatrick told AN. “It was an incredibly educational and enriching experience for our team.”

Referencing an older design concept for the project that “took a much more literal approach” to incorporating tribal influences, Fitzpatrick explained that “in our minds, [the previous design] didn’t really address the contemporary nature of the tribes.”

“The tribes have a 10,000-year history in the region but they’re also extremely vibrant nowadays,” added Fitzpatrick. “What we felt we should offer the tribes is a much more contemporary expression of their culture—using the inspiration of historic Indigenous architecture but in a way that addresses the present through a contemporary idiom.”

While its form and various decorative design elements found throughout the terminal building pay cultural homage to the Coast Salish tribes, it’s the emphasis on environmental sustainability that truly respects the area’s rich Native traditions.

Prior to the 19th-century arrival of European and American settlers, Mukilteo was a fishing outpost populated by the  Snohomish people, its name translating to “narrow passage” or “good camping ground” in the Lushootseed language. Several Coast Salish tribes maintain traditional fishing rights to the coastal waters surrounding the terminal in perpetuity as a result of the Treaty of Point Elliot, which was signed on the Mukilteo waterfront in 1855.

“Even more so than the historical allusion of the architecture, what we took away from our extensive interaction with the tribes was a sense of the area’s history and an appreciation for the pristine and incredible beauty of the site back in the day,” explained Fitzpatrick. “One of our major, underlying design precepts was to say: How can we effect this site as little as possible? How can we minimize our impact on the site and live as lightly on the land as possible?”

Designing and building a modern ferry terminal with the lightest environmental impact possible started with remediation and repurposing of a long-vacant brownfield site, home to a defunct World War II era fuel depot. To make way for the new terminal, 7,000 tons of creosote-treated pilings were removed—roughly 10 percent of the amount of toxic substance remaining in the Puget Sound. The building’s south-facing shed roof, with its locally sourced cross-laminated timber canopy, can accommodate a sizable solar array that will power the terminal for several months of the year and feed any excess energy back into the local grid. In lieu of air conditioning, the building’s great hall—the main holding area for walk-on passengers—employs large fans to boost interior circulation while a state-of-the-art rack and pinion window system automatically responds to climatic conditions and helps to improve airflow.The structure also includes an advanced rainwater harvesting system.

Considering the heavy presence of car traffic at play, the terminal’s holding lanes—seven in total with a 246-vehicle capacity in addition to two exit lanes and a dedicated bike lane—were paved with a special, enhanced pervious concrete (a “layer cake of materials” as state transportation officials put it) that filters stormwater through a layer of sand before being discharged into Possession Sound.

“We’re using the sun, the wind, and the rain to try and create a much more sensitive and light footprint on the site,” said Fitzpatrick, noting that tribal leaders were surprised as to how far the project ultimately went in terms of lowering its environmental impact. “It was really gratifying.” The project is aiming for LEED Silver certification.

Once Mukilteo’s new, regional mobility-bettering ferry terminal is open for foot and vehicle traffic later this year, the old terminal will be demolished in 2021  to make way for a new waterfront city park per the Seattle Times.

The ferry terminal is one of several high-profile projects from LMN to recently reach completion or slated to be completed in the coming months including the expansion and renovation of Seattle’s Asian Art Museum, the new Plant Sciences Building at Washington State University, and the Grand Avenue Pedestrian Bridge in Everett.