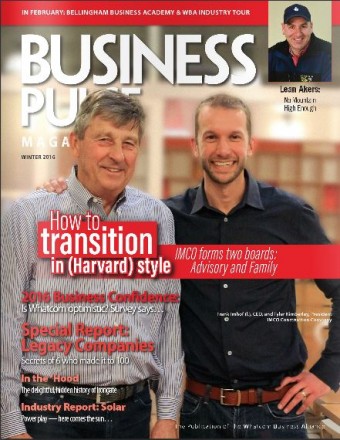 Family-owned businesses often don’t succeed with their second generation. About 30 percent of companies make that leap successfully, and just 12 percent survive into the third generation, according to reports compiled by the Family Business Institute that specializes in management succession planning.

To understand the full nature of this challenge, it’s important to understand who IMCO is and where it came from. Given the complexity, the variety, and the risk involved in construction projects in general, and particularly given the kinds of projects IMCO traditionally takes on, the transition to a new generation of leadership could be especially difficult.

Frank Imhof, who founded the company with his wife Patti in 1978, said the transition is still very much in progress. The family management team has learned a great deal in the process of how IMCO has approached business and succession, yet Imhof said many lessons remain.

“Intentional” is the word that four family members used most often to describe how they went about the transition, as well as how the company is growing and operating now. Intentional and strategic. That is seen both as a description of IMCO’s president, Tyler Kimberley’s approach and as a contrast to the scrappiness and entrepreneurial character of IMCO under Imhof’s leadership.

Kimberley is 35 years old and married to Ashley, who is Frank and Patti’s youngest of three daughters. Kimberley was named the president of IMCO in 2013, with Frank remaining as CEO and Chairman of the Board of Advisors. In this arrangement Kimberley runs the company operations, reporting to Frank.

According to co-founder Patti Imhof the succession process started with doing research. “We read a book about families in business,” she said, “and talked to families who have experienced succession planning successfully and not so successfully.” This research led to the most important decision the Imhofs made: They traveled together as a family to Harvard to participate in a week-long transition planning session with other family business owners.

That experience was a game-changer. Ashley Kimberley said the discussion focused on three overlapping circles: shareholders, family, and business management. The keys were establishing separate structure for each of these elements, and including family members who were not involved in running the company.

The structure that came out of this included a Board of Advisors. Although all shares are held in the family, the Advisory Board consists of Frank and Patti Imhof, Tyler Kimberley, and one other member of the family who rotates through the board role. It also includes two non-family members who are not involved in managing the company. Tyler Kimberley said, “This board brought an outside authority that can oversee the transition, oversee Frank’s and my roles, and has some authority in the company.” It was an important step toward formalizing management structure and providing outside expertise, influence, and accountability.

Another critical step was forming a Family Assembly. With two other daughters not directly involved in the business, plus a son-in-law and grandchildren entering adulthood, it was important to have a formal way of involving, informing, and dealing with family and business issues.

Twice a year the Family Assembly meets to evaluate and discuss – and have fun. “We look at successes and failures, not just the process but the emotions as well,” Patti Imhof said. Everyone in the family over the age of 14 is invited, which means three grandchildren of the founders have become part of the Family Assembly. The same person who facilitated the Imhof family at the Harvard program flies in to facilitate these meetings. More than work, the family plans fun things to do as well as learning experiences. The assembly provides each an opportunity for involvement and to check progress – something they are all invested in.

Patti Imhof emphasized how important this family involvement is. “The family is supportive of what Ashley and Tyler are doing,” she said. “Everyone is at the table, creating opportunity for the next generation.” While Tyler as president and Ashley as head of marketing and communications are the family members actively involved in managing the company, qualified family members can join the company by following a clearly-defined process. For those who want to become part of management, the process requires a college degree and relevant work experience with a different company.

While that formal process was not in place when Tyler Kimberley became involved, it closely described the approach that he and Ashley took toward company leadership. Tyler graduated from the construction management program at the University of Washington, then worked for Frank Coluccio Construction in Seattle and Hawaii.

“We took a very cautious approach to stepping in,” Tyler Kimberley said. “We moved to Seattle and set up a Seattle office.” Tyler said he did it because he wanted to make the best use of his urban construction experience, bring in some new kind of work to the company, plus “give myself some autonomy.” He proved he could generate new business, particularly major private clients (in addition to the government contracting that IMCO has relied on) plus conduct projects profitably and manage his team well.

Proving himself made it a relatively easy step into a VP of Operations role. “Once it became time to step into the president role, we needed to move and operate business from headquarters,” Tyler Kimberley said. So Ashley and Tyler moved the family, now with three young children, to Bellingham and to the base of operations in the company’s facility off of I-5 near Ferndale. This headquarters was designed by the talented duo of daughter Heather Cashman and architect son-in-law John Cashman who operate their design/build construction business, Axiom, in Seattle. John sits on the IMCO Board of Advisors as the family representative.

Over 35 years of Frank Imhof’s leadership, with Patti playing a vital role, the company evolved into one of the most prominent and respected local businesses. IMCO works extended far beyond Washington state, even beyond the Pacific Northwest. Recently they closed operations in Guam after five years there, and completed projects as far afield as Guantanamo Bay for the federal government. IMCO became known for a strong anti-drug policy, for an exceptional safety record, for innovations in construction technologies such as early use of GPS-guided equipment and 3-D modeling. The company website features use of unmanned aerial vehicles (UAVs), better known as drones, to document and collect critical data.

How does a young son-in-law step into shoes of a man who so successfully built a sizeable company with unique entrepreneurial abilities, inventiveness, pluck and some self-described “plain old stubbornness?”Tyler’s answer, echoed by the others in the family management group: Not try to be Frank Imhof.

Stepping into those shoes, however, represented some big opportunities for learning. “I didn’t really know what I was getting into even though I went into it cautiously,” Tyler Kimberley said candidly. “Still I had no idea what running an organization like this was going to take.”

He admitted that the pressure got to him for a while. He talked about how he felt the need to be productive before he learned that working with his team to teach and train them was being productive. He also had to learn to avoid overthinking his decisions and disallowing the pressures to overwhelm his life.

“I had to reevaluate the impact my job was having on me personally,” Kimberley said. “I was letting the roller coaster of my job directly impact the
roller coaster of me as a person. Have a great day, and I’d be in a great mood; bad day, I’d be in a bad mood. That wasn’t going to work. I had to get to the point I could have a rough day at work and not take it home. I gave myself permission to enjoy the ride, the challenges, the successes and failures.”

Where Kimberley’s style is intentional and strategic, Imhof’s is fast-moving and technical. Kimberley is focused on relationships and building a team; Imhof is fascinated by spreadsheets and is a stickler for details. Yet the two fundamentally agree on the core values of family, integrity, excellence, teamwork, competitiveness, and hard work. That central focus is an important part of making this transition work. But Patti Imhof made it abundantly clear that it is never easy.

She spoke to the emotions involved. “It’s hard for Frank to sit back and watch someone else take the lead, but he thinks he has the right man taking the lead and making the decisions.”

Kimberley credited Patti Imhof as playing a very important role as “Frank’s coach.” Kimberley said, “A lot of times I can hear her voice in him.” Still, he gave Frank all the credit for turning over the reigns. “Frank was unique, pushing me faster than I would have on my own,” Kimberley said. “I appreciated being the one tapping the brakes, rather than trying to push him out of the way. That’s unique, and one reason why it’s been as successful as it has.”

It’s also clear that the Imhofs aren’t going anywhere, other than their frequent trips abroad or, for Frank, on hunting trips. They plan to stay actively involved in IMCO as long as they can. Patti Imhoff said, “It’s exciting because we are not stepping out of being involved, we can still participate in the vision. We both love the big picture, the vision. When we started it wasn’t about vision, it was just survival. It’s so nice to be in a place where we can participate in something with so much potential, and having the right people.”

Instead of looking at what he might have lost in transition, Frank Imhof said he sees it as an advantage: “In a way it frees up a lot of my time to get involved in areas I feel need more of my time,” he said. “Backing out of operations allows me to look at areas I haven’t looked at close enough in the past.”

Frank is well-known locally for his involvement in community activities such as his role on the PeaceHealth St. Joseph Medical Center Foundation board of directors. He also is taking advantage of more available time to work on issues important to him, such as open and fair competition in the construction industry. He will become president of the statewide Association of General Contractors in 2018, after using the next two years to work through the chairs and to prepare for his leadership role. It will involve travel to Washington, D.C., as well as numerous industry meetings and conferences.

For strong family-oriented business leaders like Frank and Patti Imhof, transitioning ownership and leadership to the next generation never comes easily – as sadly demonstrated by the statistics and so many broken family relationships in other family-owned companies. But Frank said, “Actually I’m enjoying the transition. I still have plenty to do, but I can get out of here when I want and be comfortable that the company is well managed.”